If you're looking for something fun to read, Alexander McCall Smith is the perfect author to turn to.  I've devoured the No.1 Ladies' Detective Agency series and the 44 Scotland Street series.  His books are sweet, you care about the characters, and there are satisfying story arcs. And there are gems of wisdom or fresh perspective liberally scattered about.  Below is one of the gems I ran across recently in The Importance of Being Seven, page 220.  For context, Bertie is a six year old boy with a controlling mother, to put it mildly.  Stuart is his dad, who is taking on his first fishing trip.  They are at a gas station, filling up with gas and provisions for the day.

'A good choice, Bertie,' said Stuart, as he came in to pay for the petrol. 'And how about some chocolate?'


Now, I am a great lover of chocolate (65-70% cacao, with dried cherries or hazelnuts please), but I don't think that I truly realized its potential for greatness.  That chocolate carries with it a power, an "overwhelming sense of gift and possibility" that fills one with awe--beautiful!

I say we start a movement.  Before the opening of the UN General Assembly, we place a chocolate bar at every seat.  We airlift chocolate to North Korea and Iran.  We urge Hershey's to make corporate donations of chocolate in equal proportions to Republicans and Democrats!  It's not just Charlie's rare golden ticket in the wrapping that fills us with a "sheer, overwhelming sense of gift and possibility"--it's the chocolate in every one!  I, for one, will be working on future conflict resolution with my new found tool, chocolate.
Posted by Sarah at 10:18 PM 3 comments:

Since I wrote about axioms, I’ve been trying to reduce my world view down to its barest parts.  What are the foundational axioms upon which everything I believe rests?  How can I succinctly state the beginning from which I start to view and interact with the world?  It’s difficult.

Which leads me to an interesting side thought—that we can’t live our lives like a geometry class.  (Which some people rejoice about!)  We don’t come out of the womb and are instantly handed our set of axioms.  Imagine the picture—baby comes out, doctor whacks your butt to make sure you’re breathing, cut the umbilical cord, and says, "Here are your four to six foundational principles, start figuring out the world outside the womb. Have a nice day!"  We don’t live a dry, clear cut, systematic theology.  You can’t.  Life is  messy.   We even come out messy, covered in blood.  You have to start in medias res, in the middle of things, and work out your world view from there.

But, what if we are handed our axioms from the moment we exit the womb?  Do our surroundings and how we are brought up stamp our world view on us, like a plastic play dough mold?  I think so.  At least, our initial world view.  Hopefully we reach a point where we think about what we think about—come to the point of living an examined life.  At which point we choose to accept or reject the axioms of our parents, friends, teachers, media, leaders.

So, tracing my way back from that rabbit trail—when I first started to try to encapsulate my axioms, I thought of an exercise to help boil down what you truly believed.

So what say you? Care to join me in this exercise?  For a lot of us this is Thanksgiving week, so in between turkey comas and crazed pre-dawn deal hunting, see if you can find some time to try the exercise out.  Let me know if you’re going to give it a go, and we’ll see what we find out!
Posted by Sarah at 6:18 PM No comments:

I didn't finish the blog post I was planning for today.  Here's why: 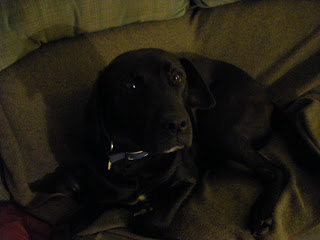 Meet my dog Stewie.  I got him from the pound, and they told me he was a black lab mix.  I'm guessing he's mixed with kangaroo, because he jumped my SIX FOOT HIGH fence a record four times this week!  (He also jumped the fence at the dog park twice, but he came back on his own in under two minutes each time.)  So this week I've spent a lot more time than I planned with my dog, the farm store, and my fence.

I'm thinking about putting up an electric fence, but they are a.) costly and b.) complicated.  So while I weigh the pros and cons and feasibility, I'm putting about 18 inches of chicken wire on the top of my fence, all the way around (oh boy, won't my neighbors love me!).  I've been playing the proverbial whack-a-mole, putting chicken wire up in places where he has succeeded or tried jumping.  So I'm cutting to the chase and putting it up everywhere--and praying he doesn't figure out how to dig under the fence!

While I'm finishing the full implementation of the Stewie Containment System©, Stewie is always on the leash or tie out.  He's really pathetic on the tie out, just sitting at the end of it, looking at me pleadingly, with those big brown eyes.  I have to say, "No! You can't pull the cute card on me! This is for your own health and safety!"

While I was wrestling with the bamboo, chicken wire, and staple gun, thinking I should have grabbed my safety goggles so my eyes don't get poked out, it is interesting what verse popped in my head.

I will instruct you and teach you in the way you should go;
I will counsel you with my eye upon you.
Be not like a horse or a mule, without understanding,
which must be curbed with bit and bridle,
or it will not stay near you.
Psalm 32:8-9


In response to this verse, I think, "Exactly! If only Stewie would stay put, or learn to come when called, we could be out walking and playing, instead of me bleeding from bamboo splinters and chicken wire pokes.  Hmm, when was my last tetanus shot, anyway?"  Then I remember this is a psalm of David, not Dr. Doolittle, and it's addressed to me, not Stewie.  And I think, "Ouch," and not (only) because of splinters.  The horse and mule is without understanding, but it is implied that I am to have understanding.  What fences, what heavy handed hemming in of circumstance, do I try to escape?  How much more fun could God and I have if I yielded sooner?  Hmm.  I'll let you know how Stewie does with his fences, as I ponder how I'm doing with mine.

A friend recommended a book, God Behaving Badly: Is the God of the Old Testament Angry, Sexist, and Racist? by David T. Lamb.  In it, the author answers the seeming contradictions in God’s character between the Old Testament and the New.  (A great book so far, by the way.)  In the chapter I’m on, Lamb is answering the question of God being angry or loving.  And he’s talking about my favorite Hebrew word, hesed, which can be translated as steadfast love or mercy.  It’s my very favorite word, so Lamb’s walking close to my heart when I read this:

“Yahweh also waited to punish the Canaanites because, even though they were guilty already, their sin was not yet finished (Genesis 15:16).  So God waited four hundred years to punish the Egyptians and the Canaanites, and during this period his own people paid the price.  Because Yahweh is slow to anger, his people were not only homeless but also slaves and victims of oppression.  Eventually, Yahweh got angry at the crimes of Egypt and Canaan, and he finally delivered Israel from enslavement and provided them with a homeland.  However, for four hundred years in Egypt, they paid the price for Yahweh’s slowness to anger.”  (p41)

The thought flashes across my mind that some of the crap I endure might be because God is showing mercy—hesed—to other people.

– is my first, not so saintly reaction.  I always try to figure out why or where the crap in my life came from, in order to get rid of it as quickly as possible.  None this four hundred year stuff, thanks.  So I ask, “What did I do wrong? What lesson is God trying to teach me?”  Because if I can identify the wrong, then I can correct it.  If I can identify the lesson, then I can learn it.  And then the crap leaves.  Or that’s how I’d run things.  But the crap in my life might be God showing mercy to someone else.  In which case there is nothing I can do to get rid of it any faster!

While these thoughts are hitting home, I remember that God tells us to be like Him—“be holy as I am holy.” (Leviticus 19:2; 1 Peter 1:14-16) We’re to imitate Christ.  The word Christian even means "little Christ".  Some parts of God’s character are that He is long suffering, slow to anger, and merciful.  Which means that I am suppose to be long suffering, slow to anger, and merciful.  And I think, "I just want to not have to deal with crap.  I don't want to be long suffering."

So I wonder, well, how can my crap be related to another’s mercy, anyway?  And I decide that I don’t know.  In the midst of it, the Israelites didn’t know that their period of four hundred years of slavery was actually God showing mercy to the Egyptians.  On the flip side, neither did they know that at the end of it they’d have their own country.  Which is amazing, since before ending up in slavery, the Israelites were nomadic foreigners, with no land they could call their own.  Next I remember the verse that tells us to trust in the Lord and not rely on our own understanding of things.  With this new take on God's mercy, trusting is a bit more difficult.  In the The Lion, the Witch, and the Wardrobe, one of the girls asks if Aslan is safe.  She’s told, “'Course he isn't safe. But he's good.” Trusting God isn’t safe, but He is good.  Trusting God doesn’t mean that I get to be comfortable.

After Jesus said something particularly difficult for people to swallow, He asked Peter and the disciples if they were going to leave him like the crowd did.  Peter said, “Where could we go?  You have the words of life.”

I just figured out that God thinks showing mercy to people is more important than my comfort—to the point where His “chosen people” are subjected to four hundred years of harsh slavery so that He could extend mercy!  So I could choose not to follow this God who sacrifices my comfort, my happiness even, so that He can show mercy to others.  He may even have me endure crap so that he can show mercy to people who won’t respond to that mercy!  But where else could I go? I am convinced that this God has the words of life.  It’s not worth it to go elsewhere.  And, on a practical level, there is no guarantee that I wouldn’t suffer if I didn’t follow Him.  At least here I have the assurance that the crap will have meaning.

So if you’re dealing with crap in your life, there could be many reasons for it.  I know that I’ve had a hand in creating a lot of the crap I’ve had to deal with.  But one reason I had never considered was that the crap in my life and yours, may just be because God wants to show mercy to someone.