Happy Birthday to Me!


Consider this post your birthday party goodie bag, filled with random bits of fun stuff, not really connected at all.

Today I turn thirty-three.  Which is how old Jesus was when He started His work.  So I should probably get busy now.  :o)

One of my favorite non-main Star Trek characters is Lwaxana Troi.  She is quite eccentric and has this really impressive string of official titles.  She is Lwaxana Troi, Daughter of the Fifth House of Betazed, the Holder of the Sacred Chalice of Rixx, and Heir to the Holy Rings of Betazed.  Along the theme of names, titles are that by which one is known.  I've been feeling like in this last season of my life, Jesus has been expanding my titles:


Sarah, Princess, Dear One,
Bat-Melek, Daughter of the King,
a Woman Unashamed.


I do in fact intend to blog more regularly.  I've been shooting for one a week, but hitting one a month.  As a birthday is a new start (like New Years), I'm going to be diving back in to blogging with renewed intentionally.  So stay tuned!

I've been tweeting one "Random thing for which I am #thankful" each day.  You can follow me on Twitter @Batmelek.  If you've missed it, let me get you caught up:

Random things for which I am #thankful:
—good headphones and music recorded in stereo.
—bosses who have and show compassion for their employees.
—salmon and hazelnuts!
—straight up blue, (the color of the sky directly above you on a clear day), and its memories.
—the resiliency of two year olds!
—rocking out to @Superchick !
—Tuba! #Tuba #Tuba #Tuba #yesalwayscapitalized #showrespect
—that I am not a Vulcan. (Though Vulcans are still cool. LLAP)
—Stewie’s unbridled enthusiasm when I pick up his leash.
—analogy and metaphor, and their cousin parable.
—the smell of rice cooking.

And lastly, a picture of my parents and me. 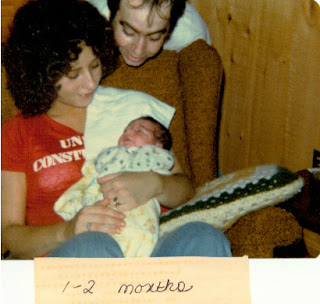 I'm off to eat my birthday tomato soup cake, catch you next week!
Posted by Sarah at 6:00 AM