I Am Wonder Woman

I remember the first time I read something where the author used inclusive pronouns. Reading right along, "he this", "he that", "she this". Stopped me in my tracks.

Now, I'd taken Latin in high school. I understood the grammatical convention behind using masculine pronouns as the default. I'd never felt excluded by the generic masculine pronouns. But seeing a generic feminine pronoun I felt included. The author intentionally meant for me to be included. It's the difference between:

That said, the new Wonder Woman movie is transformative. I didn't have to imagine myself fighting with the superheroes. I was the superhero. The movie stopped me in my tracks like the first time I read an inclusive pronoun. I was intentionally included.

This sounds dry and academic. However the effect was anything but. I insisted on sitting through all the credits, processing. I cried as something indefinable inside broke open and started healing. My jaw was set with determination for a solid hour after I left the movie. I resolved to get that "nevertheless she persisted" t-shirt I'd been meaning to buy. 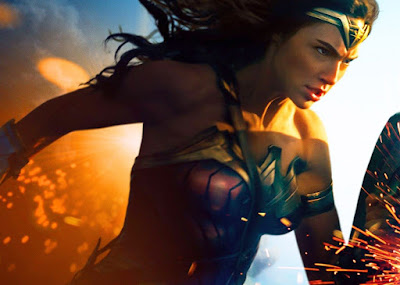 As a wonderful bonus, in addition to being a women superhero, Diana reflected me also in her temperament and outlook. This is right, that is wrong, I'm going to do what's right. I cried as she leapt out of the trenches to cross no man's land (ha!) to save the village. It's impossible, but it is right and honorable, so we do it.

I'm appreciative that the movie was set in World War One. Nazis are too easily evil, and overdone. WWI let Diana see that things aren't cut and dry, right and wrong, good and evil. Realizing that sucks. It's a pit in our stomach. We collapse and can't stand up. Our world reels. But! But. Even though things are messy, Diana fights for truth. It's more complicated and difficult than before, but it's even more important now.

Wonder Woman is a postmodern superhero movie that still holds on to truth and goodness. And Wonder Woman includes us women in the fight for that truth. RAWR!!!!
Posted by Sarah at 3:44 PM