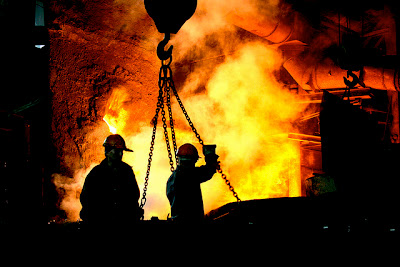 After a night of uneasy dreams, I woke up praying, “I need You, God, I need You.”  (Which is always true, but that kind of prayer springs up more readily when I’m out of sorts.)  I was uneasy about work mostly, since it has been a pretty stressful year.  So I shared the stressors with God, then turned to Psalms.  In my perpetual cycling through Psalms, I read 103, 104, and 105 this morning.  These are three lengthy Psalms recounting the works of the Lord, from details about His provision for each aspect of creation then to recounting His history of faithfulness to Israel.  It provided great perspective.

Psalm 105 talks about Joseph in verse 16-19.  Verse 19 says, “until what he had said came to pass, the word of the Lord tested him.”  Tested, tried—or refined.  The story of Joseph is a favorite of Christians when they are trying to encourage someone who is facing difficult situations.  I have been on the receiving end of this attempt at encouragement, and I’ve never found comfort in someone comparing my situation even remotely to Joseph’s.  I’d think, “I don’t want to be a Joseph!”  Joseph was the eleventh son in a dysfunctional family, who was spoiled and therefore either arrogantly prideful or completely clueless.  (Why else would you tell your older, not spoiled and therefore resentful brothers, that they would bow down to you one day?  And why would you tell them this not once but twice?!)  His brothers then sell him into slavery, as a concession for not killing him.  In slavery, he is faithful and promoted to head slave—but still a slave.  He resists the immoral requests of his master’s wife, and gets falsely accused of initiating the very immoral act that he refused.  Because of his moral stance, he ends up getting thrown in jail.  He is now worse than a slave.

Betrayed, beaten, falsely accused, imprisoned—not encouraging.  Yeah, Joseph rises to second in command over Egypt and saves the known world from the biggest famine it’s ever seen.  But—and this is my American culture showing itself—was it worth it?  On a personal level, was it worth it to Joseph?  I mean, he names his first kid because “God has made me forget all my hardship and all my father’s house,” and the second “for God has made me fruitful in the land of my afflictions.”  (Genesis 41:51-52)  Bitter much?  Is he forgetting his hardship or remembering it every time his says his kids’ names?

Interestingly, though, when Joseph asks his father Jacob to bless his sons, Jacob gives the greater blessing to the younger—over Joseph’s protests.  It is like, “No Joseph, don’t dwell on forgetting.  Dwell on the fruitfulness.”

Back to Psalm 105:19, “until what he had said came to pass, the word of the Lord tested him.”  “Tested” sounds really negative.  It’s also translated “tried”, which isn’t much better.  The word means “refined”, as in refining metal.  This is both good and bad.  Refining is way more intense sounding then just testing/trying.  It’s a process of intense head—literally liquefying metal—to remove impurities.  Saying that the word of the Lord liquefied Joseph like metal strikes me as way more painful than mere testing.

And the goals of refining are more intense, too.  The goal of a test is to pass.  “Yay, I got a B+.  I passed.”  Sounds kind of arbitrary of God.  But the goal of refining is a stronger, purer metal.  That sounds much more purposeful—and more worth it.  If I’m going to be compared to one liquefied by the word of God, if the goal is more than a passing grade, but instead a truer strength and purity, an enduring purpose—well, to be honest, that’s still crazy.  But crazy difficult and crazy worth it go together.

We’re suppose to judge things by their fruit.  In the end, what was the fruit of the word of the Lord refining Joseph?  Yes, the known world was saved.  Yes, God cares about creation collectively.  But God also cares about His creation individually (just check out the Psalm prior, 104).  What was the fruit for Joseph personally?  Instead of forgetting his father’s house, he has to confront them.  And I think they were reconciled, though still pretty dysfunctional.   In blessing Joseph’s younger son—the one named after fruitfulness—I think Joseph was being reminded to remember the fruit of his refining.

Bless the Lord, O my soul,
and forget not all his benefits,
who forgives all your iniquity,
who heals all your diseases,
who redeems your life from the pit,
who crowns you with steadfast love and mercy,
who satisfies you with good
so that your youth is renewed like the eagle's.
Psalm 103:2-5


The liquefying is no less crazy painful.  But the benefits of being liquefied are crazy fruitful, too.  Remind me of that when I'm saying ouch.