The Tyranny of Perfectionism 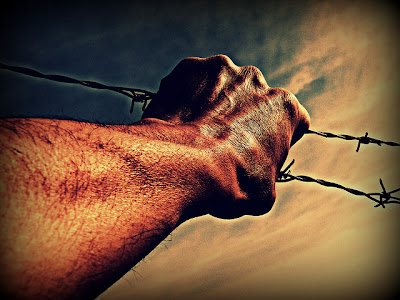 There is a quote from C. S. Lewis “that the doors of hell are locked on the inside.”  Leaving the particular theology of hell aside, there is some truth to our tendency to lock ourselves in our own torment.  That’s what perfectionism looks like for me.  Like a dictator who enforces martial law, who gathers all the resources of the state, inflicting poverty and fear on the people, all in adherence to an unattainable ideal.

So is perfectionism.  Only the dictator isn’t the standard of perfectionism—I am the dictator.  I am my own tyrant, imposing an unattainable, usually contra moral, ideal.  All mental, emotional, physical, and even spiritual resources are spent in service to this ideal, causing a poverty in a life meant to be lived in abundance.  Failure to meet the ideal is met with internal martial law.  Producing fear in a life meant to be lived with power, love, and a sound mind.

The standard that I do not meet is my own.  But what is the most insidious part of this is my tyrannical self is convinced this standard is God’s standard.  And when the pain and resentment of living under a standard that is never met reaches a boiling point, when the anger can no longer be internalized to correct and control behavior, it bursts out at God.

This is very much like the older brother in the prodigal son parable.  He is infuriated at the grace shown to his younger, irresponsible, reckless brother.  This is not a normal emotional reaction—well, perhaps normal, but not appropriate.  It is a disproportionate emotional response, and is evidence of paint caused by a lie he is believing.  He has been stringently trying to adhere to his standard.  His brother did the exact opposite, and gets a banquet hall feast.  The older brother stays away from the celebration, sulking, and the Father comes to find him—for He loves all His children.

How does the older brother respond to his Father seeking him?  He lashes out at him, saying that he never even got one goat to share a meal with his friends.  His Father points out that he is always with Him and all that is His is also the older son’s.  But the older son obviously did not agree with this statement.  He did not agree that he had all along had full access to the bounty of his Father’s house.  Why?  He never met his own personal standard and therefore never felt worthy of asking His Father for anything.  The older brother states that he served his Father for many years and never disobeyed.  Yet he never felt that he belonged.  He never understood his inheritance.  He never felt worthy.  He defensively protests that he never disobeyed.  But it is one thing to never commit a sin of commission, quite another to never commit a sin of omission.  He is keenly aware that his has fallen short of his standard, and the anguish over the years has turned to anger.  He lashes out at his Father, accusing Him of being stingy, withholding reward.

He has served his Father these many years, but does not know his Father.  He complained of never even receiving a mere goat.  When in reality, all he had to do was ask, and he would have access to his entire inheritance.  I mean, the younger son asked for his half of the inheritance, and the Father gave it, no questions asked, no strings attached.

The self imposed tyranny of perfectionism draws an iron curtain around one’s self.  When I adhere to my own standard, I am cut off from God’s free market of Grace.  And the tyranny of perfectionism cannot be overthrown by a bloodless revolution.  Blood is required.  The kingdom of God invades with violence.  My tyrannical self resists, but is overcome by the blood of Jesus, and Grace invades.  The Holy Spirit renews my mind, seizing all weapons of mass self destruction, disarming this tyrant.  And for the first time, freedom is tasted.  Grace flows and rest is entered.  The righteous Lord Jesus judges and releases me, and reconciliation and healing begin.

So join me in lifting a cry against tyranny!  But know that it will require death—yours.  But you will rise again with Christ.  Praise be to God!